Nurbits was selected as a winner of the Apps For Class Challenge! The contest was judged by teachers, and that means a lot to us. Winning also means we will be able to test the game in more classrooms, and we are very excited by that opportunity.

In addition we partnered with Four Athens for this contest, a local non-profit that encourages entrepreneurship. They have helped our little start-up in countless ways, and we are happy to be able to give back to the organization and the community.
Posted by Stephen Borden at 1:59 PM No comments:

We are happy to announce that Meaningful Play has accepted Nurbits as a part of it's game exhibition and competition. Meaningful Play is a conference on designing and studying games that matter. It takes place October 16-18 2014 at Michigan State University. If you will be attending, please stop by and play Nurbits!

To celebrate we just posted our first trailer:

Posted by Stephen Borden at 9:54 AM 2 comments:

I've been meaning to post some screenshots of Nurbits for awhile now. The thing is, the game looks much better in motion than comes across in screenshots. I had the idea to post some animated gifs, and then recently I heard of this new thing that's even better called gfy, so here are some of those:


We recently showed off a shiny new render of the robot band in the basement, and in the game you can click on a robot to zoom into their robot brain.


Inside the brain you can select little pieces of brain that represent a neural network. These neural networks are the puzzles in the game, and also musical loops. Together they form the part of a song that the robot plays.


This is what the puzzles in Nurbits look like. The players connect chips together. These chips connect and send signals just like neurons do, using basic principles of neuroscience as the game's core mechanics. When the chips have enough signal to fire they play a music note. When the player correctly hooks up all of the goal notes in the puzzle the loop is complete and the chips all morph into neurons, giving the player strong visual feedback and connecting the game back to it's underlying neuroscience concepts.

Posted by Stephen Borden at 12:37 PM No comments:

Howdy blog readers!
It's me, Jef again. (yeah, sorry that's who you get. If you want better bloggers, you're gonna have to upgrade to premium)
Well it's been a little while since I last posted anything, and quite a few things have changed since I last checked in with you. First of all, I got a haircut.
So that's pretty cool.

Also, the band has come together! Now is the great time for them as they haven't quite made it big yet, so the music and teaching neuroscience is still what they're in it for. Egos haven't grown out of control yet and drug problems haven't become a big issue (though they certainly will later when we add drug affects to our robots brains in order to teach about what type of affects they have).
In fact, the band is still playing in a basement! 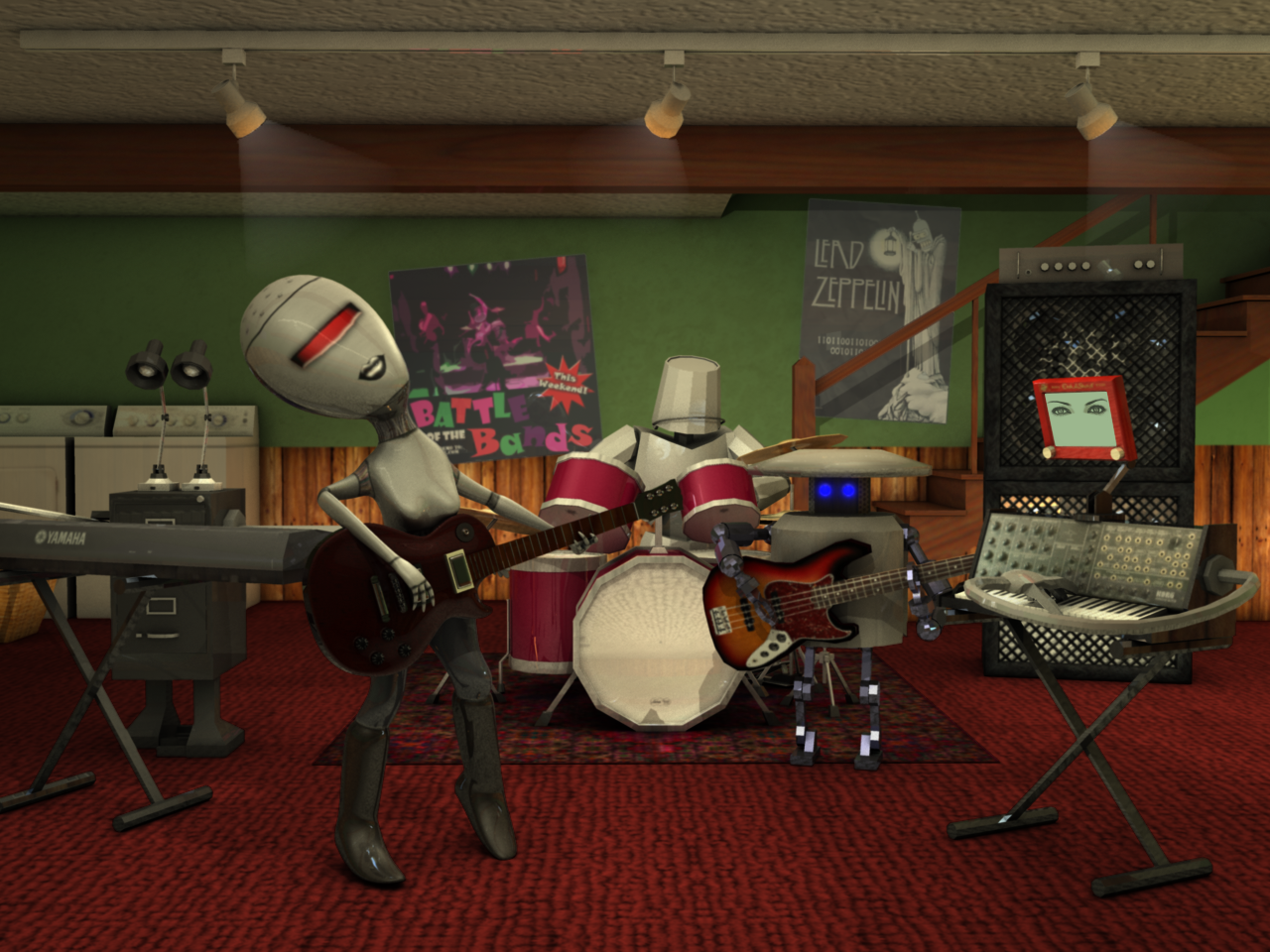 You'll notice the old guitarist is now playing drums since the new girl has some pretty amazing guitar skills. (I don't know what kind of feminine wiles she used, but Buckethead back there didn't have any problem with it.)  I also replaced the lamp on the synth piano robot with an Etch-A-Sketch because... well... let's be honest, it's awesome. I even added some fans in the background in the form of a washer and dryer. They do tend to shake around a bit when they get excited, but they don't really cheer all that much. And it's a real pain to actually get them to go out to a show.