Puttin' the Robot Band Together

So,
A robot band.
What else would an artist want to make, really? I tried to list my top 10 things I want to make as an artist, and Robot band was #3 on the list just below “sexy alien chick” and any kind of Star Trek fan art. So essentially number 1. (Since those other two are a given)

The fact is, I might be a bit out of my league here. I do not really think of myself as a character artist, nor have I done any real work for real-time rendering. So why would they want me as the sole artist on this game?
No, really. I'm asking.
Just kidding.
The truth is I have some real dirt on the NIH and IS3D and blackmail can go a long way. Now, on to some concepts...

Before we get into the robots though, just let me say I have not textured any of these robots yet, so the renders I have are all ambient occlusion renders out of Maya, except for the synth robot who I slapped a quick texture on so you could see the piano keys (since they are not built in to the geometry).

The first robot I made was a ghetto robot. This robot will be the piano player. From a story perspective, he (yeah the robot is a “he” does that make me sexist? I don't think so) was the first robot built for the band, because... well... he was the first robot I built for the band. I imagined when this robot band first got going the budget wasn't there. I therefore made him out of other household items. A lacrosse stick for an arm. (well it's in some households) A file cabinet for a body, and lamps for “eyes”. The feet are bit less realistic. I made the feet like on a wind up toy, mostly because my coworker suggested it, and I thought it was hilarious. How's he gonna play piano with one hand? I'm an artist, don't bother me with pesky things like logic and realism. 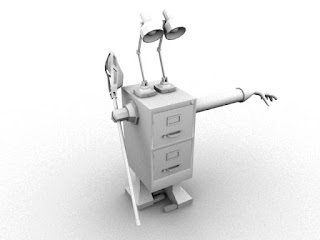 The 2nd robot I made was awesome. I'm not gonna say anything else about it nor am I going to post any picture of it, because that's all you need to know about it. Trust me. It's awesome.

The 3rd robot was the synth piano player. I made him an actual synth piano. I love the idea of the robot actually playing himself. Talk about made to be a musician! I essentially made a Korg MS-20 and added an arm. I also put a lamp on top for much the same reason as the lamps on the first robot, to simulate a face. For some reason, this is my favorite robot so far. 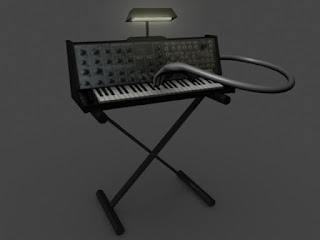 The 4th robot I call Cyl. Because he was made from a cylinder. (Yeah, not very creative, I know) Cyl is a combination of a few Star Wars characters. The first being R2D2. Perhaps the coolest robot of all time. Also I made a hat-like head that was taken a bit from Bane's (from Clone Wars the series) hat that he wears. It is not too much like Bane's hat, but Bane was just somewhat close to the look I wanted for Cyl. Cyl is the bass player and is a bit short. He's got tiny little legs and really long arms perfect for slappin out the phat bass licks. 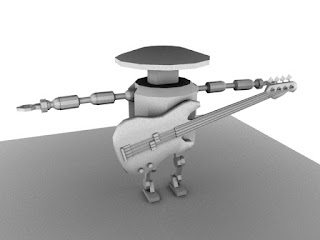 The 5th robot is the guitarist. This robot is an android, more so than the others. As Data from Star Trek TNG will tell you (yeah I'm geeky enough to use the three letter acronym. If you don't know what “TNG” stands for, I'm not sure I'm actually allowed to tell you. Just know that you'd probably feel out of place at Comic-Con) An android is a robot that looks like a human. While the other robots have anthropomorphized parts, this robot is the most human like. I did this mostly because there are many guitar type poses that necessitate a human. The sliding on the knees while jamming on the guitar for example. (Done very well by Michael J. Fox in “Back to the Future”. “Marty, that was very interesting music”) And pretty much anything done by Angus Young. Plus, seeing as at present there is no plan for implementing vocals, the guitarist will be the “frontman” of the band and I thought it might be better for animations in general, if he looked and moved like a human. And for all those G 'n R fans out there, I made him have a “bucket head” get it? 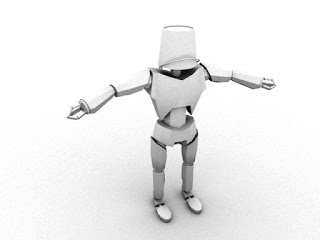 In the next art post I will discuss how great I am, and other important aspects of the art for Nurbits like the music instruments and backgrounds.
Posted by Unknown at 1:57 PM