For our third prototype we were trying to think of a better way to integrate music with our puzzle system. We decided to try a grid based step sequencer, which would work pretty well with our new UnitySynth based dynamic music system.

Chips could be placed on the grid, and chips of different widths could be used to represent notes of different lengths: eighth notes, quarter notes, half notes and whole notes. Like our previous prototypes, chips would have a threshold to reach before sending their signals on to the next chips in the neural network, and there would be an initial stimulus chip that would start that signal. We also created a relay chip to extend connections between note chips, much like interneurons in the brain. There are also excitatory and inhibitory chips that bring other chips towards or away from threshold. 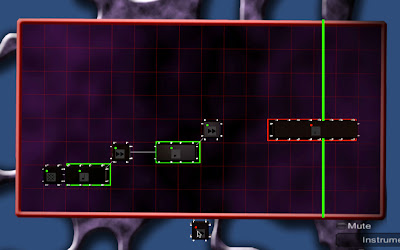 In this prototype we decided chips would connect to each other based on proximity, unlike our previous prototypes that had to be deliberately connected. After implementing these ideas we designed a series of puzzles that attempt to introduce these concepts to the player gradually.

You can play this prototype in your web browser now!

This prototype formed the foundation of what we are currently planning for the core gameplay mechanics of our final version of Nurbits. It's undergoing some evolutionary improvements as we iterate, but the core idea is present and felt interesting to us in this prototype.
Posted by Stephen Borden at 9:36 AM